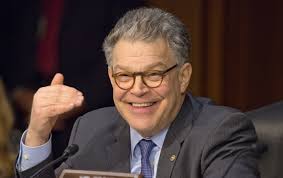 If you've recently tuned in to CNN or MSNBC you may have noticed a familiar face has returned to political punditry: Al Franken.

Over the past several months, the former Minnesota senator—whose legislative career ended in 2018 over multiple allegations of sexual misconduct—has been quietly growing his media presence, becoming a more common sight on cable news, in op-ed pages, and on the radio.

Earlier this month, for example, the former Minnesota senator appeared three times in a single week on MSNBC, weighing in on the Senate confirmation hearings for now Supreme Court Justice Amy Coney Barrett. At other times he's joined host Joy Reid to react to news or, since Election Day, has appeared regularly on Brian Williams' show to discuss Donald Trump's current futile attempts to overturn Joe Biden's electoral wins in several states via recounts, noting his own experience with a much narrower recount in 2008.

In September, he spoke with CNN's Christiane Amanpour about political satire and Trump's handling of the coronavirus pandemic, and wrote an op-ed for the network's website over the summer about how Biden could win the election.

Big Tech Cleans House! - Everything We Want You To Think