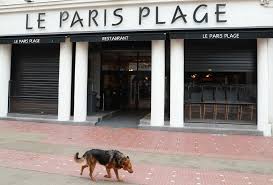 Moderna strikes deal with the UK to sell 5MN doses

Grassley to quarantine after exposure

US hospitalizations at new record

Update (1000ET): Continuing to follow the pattern from last week's Pfizer data release, Moderna on Tuesday announced a deal to 5 million doses of the COVID-19 vaccine.

Sen. Grassley, meanwhile, said he's been exposed to someone with the virus, and that he will "follow my doctor's orders" and "immediately quarantine" according to a statement published to twitter.

In the biggest news out of Europe Tuesday morning, French-language media outlets France Info radio reported that French bars and restaurants will likely remain closed until mid-January as the government tries to tampe down on the resurgent coronavirus outbreak.

Goverment officials are planning to review the situation next month, but "for now, there's no calendar set", one anonymous official said. Health Minister Olivier Veran said on BFM TV that bars and restaurants wouldn't reopen in December. Even as the number of new cases declines, some shop owners are pushing the gvernment ot allow them to reopen for the weekend after Friday Nov. 27, according to Bloomberg.

For now, at least, it looks like Macron's Dec. 1 goal is already beyond reach.