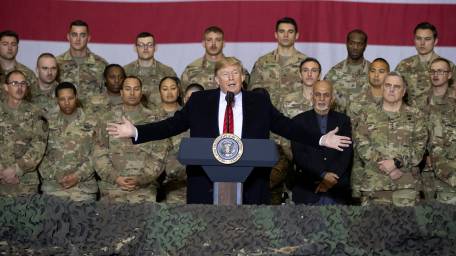 As the end of President Donald Trump's term approaches, we're seeing a flurry of firings and replacements. Such turnover has been a hallmark of this administration, as Trump constantly seeks to surround himself with loyalists. This week's changes in the Pentagon leadership have prompted some fears of a pending coup to stop President-elect Joe Biden from taking office, a panicky theory that even Vox felt the need to tamp down.

Trump fired Defense Secretary Mark Esper on Monday, replacing him with Christopher C. Miller, who only recently became director of the National Counterterrorism Center. Two narratives about Esper's departure have been going around, both involving clashes with Trump. One is that he resisted using the military to suppress this summer's protests. The other is that he resisted Trump's goal of getting troops out of Afghanistan by Christmas.

Trump has also hired retired Army Col. Douglas Macgregor as an adviser to Miller. Macgregor is a Fox News regular who wants to pull troops out of Afghanistan and Syria more quickly. That's good! He also has a lot of terrible opinions about Muslims and immigrants, having called for martial law at the Mexican border and recommended shooting people attempting to enter the country there. That's bad! Hopefully that's not going to be relevant to Macgregor's position for his brief tenure.

Both Barack Obama and Donald Trump pitched themselves as wanting to end our military involvement in Iraq and Afghanistan. Both failed to live up to these promises. Trump tried hard to get the antiwar vote during his reelection effort, but right now troop levels in Afghanistan are about where they were when Trump took office—around 8,500 troops. For part of Trump's term, the number of troops in Afghanistan actually increased.