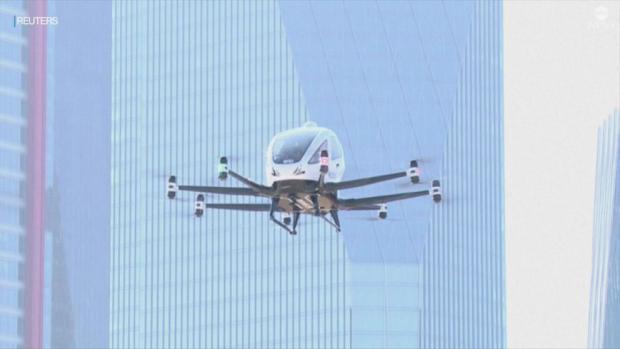 South Korea offered a glimpse of a science-fiction future on Wednesday with a demonstration flight of a two-seat drone taxi in Seoul, as the government outlined ambitious plans to commercialise urban air travel by 2025.

At an event held next to the Han River near Yeouido, a finance and banking district in the heart of Seoul, a two-seat drone produced by Chinese manufacturer EHang buzzed quietly overhead for about seven minutes at an altitude of over 150 feet.

The eVTOL - electric Vertical Takeoff and Landing Vehicle - which carries a payload of 485 pounds and can reach speeds up to 80 mph, was loaded with heavy sacks of rice instead of passengers for the flight.

Ministry of Land, Infrastructure and Transport, which is developing a 'K-drone' air- traffic management system as it plans for a sky that will soon be filled with everything from taxis to delivery drones.

'We are very happy to introduce drone taxi, the future transportation system, in Seoul for the first time in Korea,' said Seo Jeong-hyup, acting mayor of Seoul. 'The city government will do its best to ensure that the human dream of flying in the sky is safely settled as a reality for Seoul citizens and to support the future industry of Korea.'

MOLIT Vice Minister Son Myung-soo said in a statement the government has created a comprehensive urban air mobility roadmap 'to achieve commercialisation by 2025 without any disruptions through collaboration with industry, academia and research institutes.'

Keep up the Delta Airlines boycott - Delta cancels over 100 flights on Sunday,

Airline Trade Group: COVID-19 Vaccines Should Not Be Mandated for International Travel