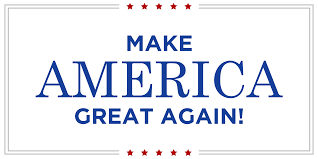 Those that would say that, you do not know what a fierce competitor that I am as I have a long history as an athlete and a coach that serve as a testament to that trait. I took on the criminal John McCain as he and his international bankers tried to steal my land without compensation. It took 8y ears, but at the end of the day, my community won! I fear nobody as I operate under the authority, will and protection of the Lord Jesus Christ. I was dragged away from two successful careers to do the work I am doing now. I have a mission to spread the good news of Jesus Christ and the best way to accomplish that goal, in today's world, is to keep the freedoms of the Republic alive and well. Subsequently, my allegiance is to this purpose and not to Donald Trump, the man.

The above statement does not mean that I am not emotionally attached to Trump, I am. My family has experienced two deaths in the past month. The treatment and defeat of Trump feels like I am burying a third family member. Regardless of how this election debacle turns out, I will always be grateful for Donald Trump as he provided a stay of execution from America's most well known practicing 4th degree Coven witch, Hillary Clinton. Trump endured so much abuse and treason in his Presidential tenure, that I marvel at his strength and resilience to keep doing what he was doing.

People ask me, why do you support Trump and I used to flippantly but truthfully answer that "he won't put me in a FEMA camp".  Ronald Reagan was an effective President until he got shot by a friend of the HW Bush family, then Reagan fell back to the pack and was like all the rest. Trump cared about saving the economy. He cared about ALL of our citizens having an opportunity to succeed. However, he was hated because he was a nationalist who loved America who refused to hand over this country to the globalists.