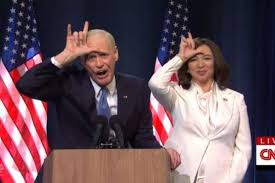 SNL spoofed Joe Biden's acceptance speech, and sent up Trump's concession
Alec Baldwin sang 'Macho Man' on the piano while debating his future
Maya Rudolph as Kamala Harris got her phone out to dance at the podium
Carrey delighted fans with his Ace Ventura reprisal, calling Trump a 'loser'

And Jim Carey, reappearing as Joe Biden, channeled his classic Ace Ventura character to call Trump a 'loser', to the delight of fans.

The episode was hosted by Dave Chappelle, who also hosted the first show after Hillary Clinton lost in 2016.

In that earlier episode, the show opened with Kate McKinnon as Clinton, playing the piano and singing Leonard Cohen's 'Hallelujah' in a sorrowful acceptance of her loss.

Saturday's show picked up where McKinnon left off, only this time with Trump singing a downbeat version of the Village People's song.

Big Tech Cleans House! - Everything We Want You To Think