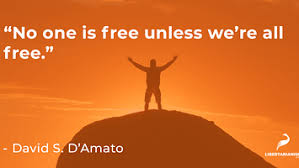 What are the chances of a free society given that there are obviously so many statists living in our country? Should we just throw in the towel and surrender to despair and depression? Should we throw our lot in with the reform-libertarians who long ago decided to devote their lives to reforming the welfare-welfare state and simply call their reforms "free market" and "libertarian"?

Imagine being a statist in that society. Imagine the temptation to surrender to despair and depression. How would they ever get Americans to give up that way of life in favor of a statist system that has all of those features and more?