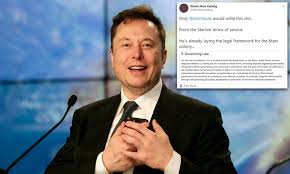 However, on Mars it will follow self-governing principles based on good faith

colony on the red planet will not recognize Earth-based laws.

The claims were spotted buried in Starlink's beta consumer service terms that was recently sent to customers ahead of the internet rollout.

Dubbed 'Governing Laws,' the section states SpaceX will not abide by international laws beyond Earth and the moon, but instead adopt self-governing principles 'established on good faith.'

The terms of service was shared on Twitter and Reddit, but also comes a week after the company revealed plans to build a mega constellation of satellites around Mars and a self-sustaining city that does not rely of Earth for survival.