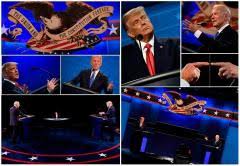 In 1952, Harry Truman was in his third year of a stalemated war in Korea that was costing 200 American lives every week. He lost the New Hampshire primary to Sen. Estes Kefauver and decided to pack it in.

In 1968, Lyndon B. Johnson had also been challenged in New Hampshire, by Sen. Eugene McCarthy. And, he, too, had on his hands a seemingly endless Asian war if he was not prepared to escalate militarily and add hundreds of thousands more troops to the 500,000 already in Vietnam.

In 1980, Jimmy Carter also had a challenge from within his party — Edward Kennedy. And for the entire last year of his presidency, 52 U.S. hostages were held in Teheran while Carter presided over an economy where the interest rates had hit 21% and inflation 13%.