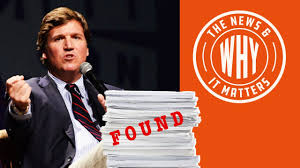 A few points, I received emails and phone calls from people asking me: How stupid was Fox news to send original documents overnight without making a copy?

Similar comments were made at my original post on the story, WOW Damning Hunter Biden Documents Suddenly Vanish. But in that post, I included the original Tucker Carlson video report on the lost documents, and at no point did Carlson say that what was sent overnight was the only copy.

When you are dealing with curious situations you really need to pay attention to what the facts really are as stated and not assume, as Perry Mason would say, "facts not in evidence." In Thursday's broadcast, Carlson revealed that a backup copy was made.

So now let's move on to the curious thing that happened with this package. It really does appear as if it was targeted.

The first question that has to be asked is: If this was a deliberate act, who would have known about the package? I can think of two possibilities. There is a mole at Fox news or someone's phone is tapped, most likely Carlson's if indeed it is a tapped phone situation.