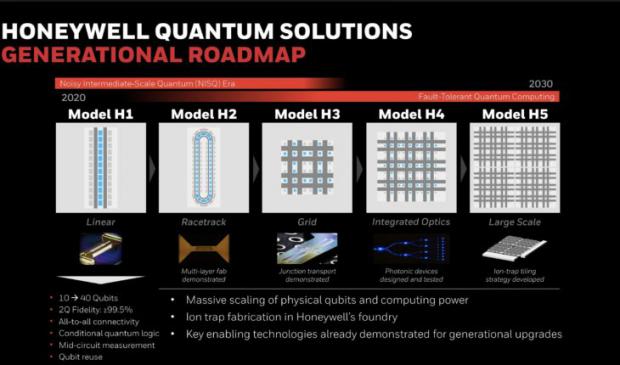 This is the highest quantum performance for any publicly known quantum computer.

In the Nextbigfuture interview, Tony Uttley and Brian Neyenhuis described work and results in the lab which show that there is substance and technological results for the entire H1 to H5 roadmap. They have already built versions of the H2 racetrack device. Honeywell has experimentally proven the main technologies and capabilities needed for the H3, H4 and H5 devices. This work gives them confidence that their quantum roadmap will be successful over the next 5-10 years.

In the Nextbigfuture interview, Tony indicated that the Honeywell qubits are separated by a few microns. There are few microns sized zones where the radio frequency devices hold or precisely move the ions. The Ytterbium ions can be held for a day or more. Lasers appear to have visible light wavelengths. Greenlight has wavelengths in the 520-560 nanometer range.

The image of the current linear series of traps show the squares which generate the radio frequencies and magnetic fields.

The ions move and are held above the RF and magnetic traps.

There are many lasers but the lasers perform different functions. One laser converts the Ytterbium atom into an ion. Other lasers perform various quantum functions such as entangling or merging two qubits.