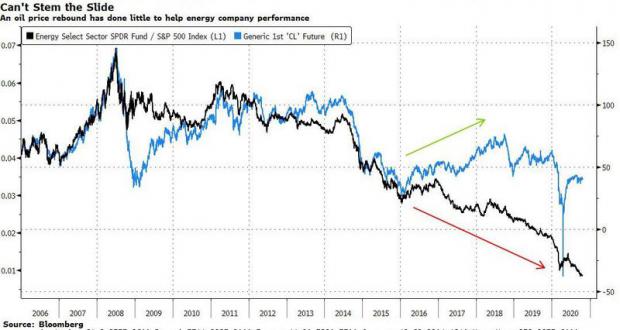 Parallels between tech in the 1990s and today are common. But there's been little mention of what the energy sector went through at the same time and how it suddenly looks so familiar. History's repeating itself as it appears energy can't attract investors -- again.

Then as now, the backdrop to energy's M&A boom is a collapse in oil prices. The difference this time, however, is the deals are happening at a quarter of the traditional premiums.

During this pandemic era, four deals have already emerged: Chevron's takeover of Noble Energy, ConocoPhillips's acquisition of Concho Resources, Pioneer Natural Resources's purchase of Parsley Energy and Devon Energy's merger with WPX Energy. This appears to be just the beginning as rumors circulate of more deals to come.

The economy has structurally changed since 2000, which makes tech's acceleration look real and lasting. That's not so for the energy industry, which staged a comeback in the early part of the century as tech dropped. But this time around, the sector faces worsening supply dynamics and a demand hit from which it's likely to take years to recover.