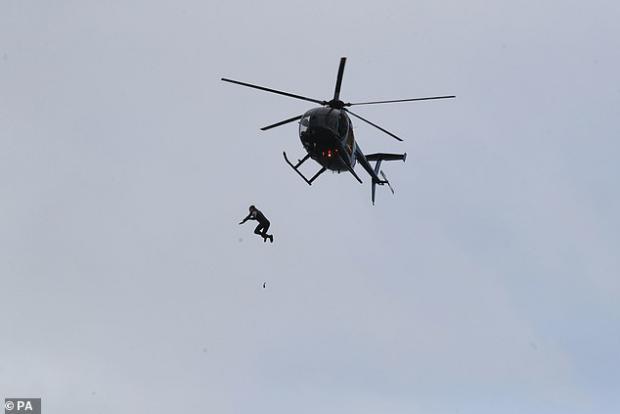 A former paratrooper threw himself of a helicopter from 131ft into the sea without a parachute today setting a new world record in the process.

John 'The Flying Fish' Bream plummeted into the waters of the Solent, reaching speeds of 75mph, as part of his daring stunt to raise awareness of veteran suicide.

The father-of-three spent 18 months training for the stunt as even getting it slightly wrong could have left him seriously injured or even dead.

Today he set the new world record for the highest freefall into water from an aircraft and the record for jumping into British waters, after he organised the event off Hayling Island, near Portsmouth, to raise awareness of suicide in veterans.

The dangerous stunt could have resulted in severe injury or even death, as Mr Bream explained if the technique is wrong 'the water can absolutely rip you in half'.

The 34-year-old's children say he is the talk of their school and that they call him the 'modern day Evel Knievel'.

Mr Bream, from Bedhampton in Hampshire said: 'It feels so amazing to have finally done it, I'm so happy.

'I'm so pleased to have got this smashed and hopefully I've made people smile and laugh a little.'