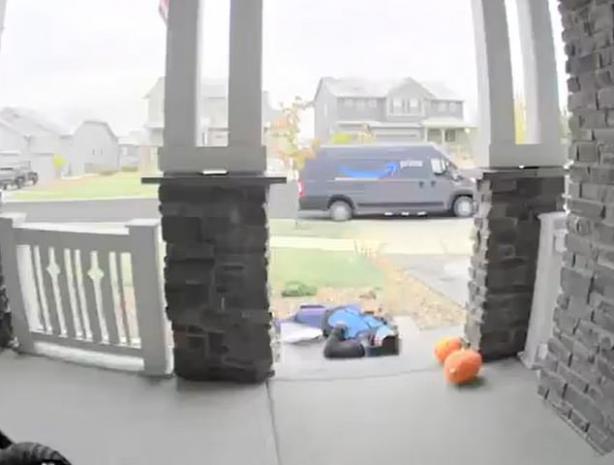 A curse-happy Amazon deliveryman slipped and fell twice at the same porch Friday, declaring it was 'gonna be a tough day.'

The delivery guy was stopping at a home to drop off two packages when his repeated pratfalls were captured on a surveillance video on the porch of a US home, dated October 23 and posted to Worldstarhiphop.

With a Prime van parked on the street, the hooded and masked man jogs up the driveway and steps on a concrete walkway leading to the porch.

The moment it touches the pavement, his right foot streaks out, sending him to his hands and knees.

He gets up, mounts the pumpkin-dotted porch, and declares himself 'f*****g hurt.'

The deliveryman then staggers to the ground and lies on his back, writhing and moaning in pain.

A voice apparently coming from inside the home then asks after him.

The Amazon worker then rises and picks up the two packages he'd dropped, plus a third one he'd set down.