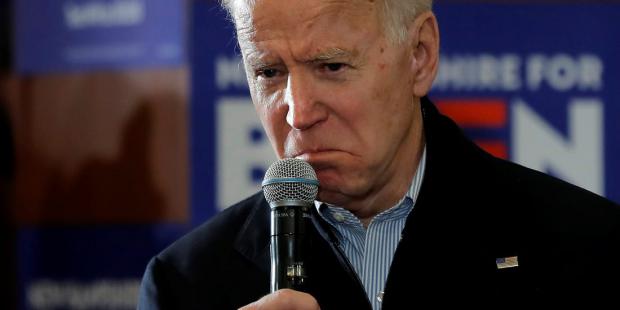 His lumbering dinosaur newspaper, TV and Big Tech "protectors" are increasingly outflanked in their efforts to "black out" all the new documentary evidence that he's owned by the Red Chinese — outflanked by a few TV and radio talkers who decline to wade into the tar pits of extinction alongside "60 Minutes" (see Maria Bartiromo, Tucker Carlson, Lou Dobbs, Mark Levin, for starters) and by a bold pickup team of "work-around" young computer and social media geeks who figure the American electorate at least deserve to make up their own minds about the bribing of the Biden Cartel.

His pathetic personal appearances had been drawing fewer than 30 supporters, even as thousands of ecstatic Trump fans drove by, cheering, honking their horns, and waving MAGA flags. See . . . :

Shuffling Joe's only reply to questions about the millions in Russian and Red Chinese bribes — about a potential President of the United States being owned by Red China — has been to insist there is no scandal. So perhaps the final act of this pathetic drama was inevitable:

According to multiple asources, the shuffling, tongue-tied Joe Biden will do no more in-person campaigning in the remaining nine days before the Nov. 3 election. He will remain in his basement, watching re-runs of "Matlock."