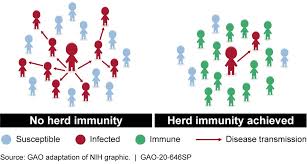 I found this exchange on herd immunity enlightening:

We circle back to the idea of herd immunity, which Mr. Kulldorff calls "the most misunderstood term of 2020." He jokes that use of the term can invite "accusations of mass murder," and Dr. Bhattacharya laments its frequent "mischaracterization." The words, he says, are a "technical term that comes out of standard models of epidemic spread." It is the "end state of any epidemic where some immunity actually happens after infection. It's a biological fact. It's not something nefarious or strange." Many media outlets, he complains, have said that "we're advocating a herd-immunity strategy. That's a propaganda term. After all, the lockdown-until-a-vaccine strategy will also end with herd immunity."

"As an epidemiologist," says Mr. Kulldorff, "it's weird and stunning to have this discussion about herd immunity—flockimmunitet in Swedish." He likens it to gravity: "You wouldn't have physicists talking about whether we believe in gravity or not. Or two airline pilots saying, 'Should we use the gravity strategy to get the airplane down on the ground?' Whatever way they fly that plane—or not fly it—gravity will ensure eventually that the plane is going to hit the ground."

Also of note from the interview:

Lockdown policies...reflect, Dr. Bhattacharya says, a "sort of monomania." The world "panicked in March, and the focus came to just be on Covid control and nothing else." People saw pictures from Wuhan, China, and Bergamo, Italy, and concluded that they had to do "something very, very drastic in order to address this drastic thing that's happening." There was "an action bias that led to the adoption of lockdowns as a form of contagion itself."