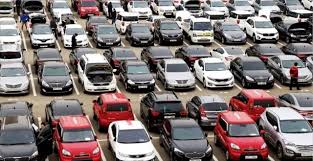 The private sale used car market is crashing. Very few people are buying that way, though information about this is being suppressed by not separating out person-to-person used vehicle sales from dealer-to-person sales.

Which are booming. But we get ahead of ourselves.

If you've attempted to sell a car lately yourself, you probably already know the score – from the lack of responses (excepting spammers) to your Craigs List or Auto Trader ad. If you're asking more than $5,000 for whatever it is you're selling.

The reason being that very few people can scrape together a stack that high.

Back in January – before the Gesundhsitsafuhrers (not the WuFlu) wrecked the economy – Market Watch reported that 74 percent of all salaried workers were living paycheck to paycheck and that three out ten Americans had zero reserve cash at all. They would need to finance a new refrigerator if their old one croaked.

How are Americans doing now, given tens of millions no longer have a paycheck at all  – or a temporary one, issued by the government as compensation for cancelling their employment?