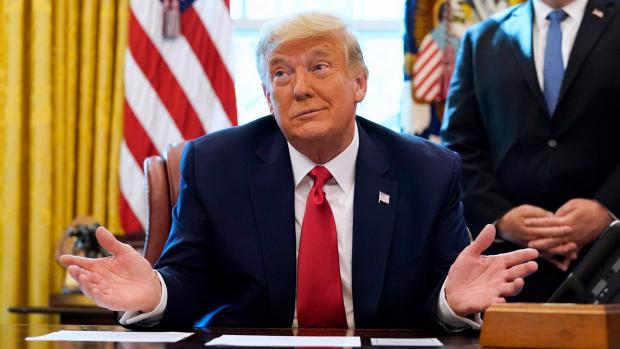 Dr. Anthony Fauci hit President Donald Trump and other White House officials for going maskless in a crowded Oval Office meeting — noting that it's "not optimal for people to see."

MSNBC's Chuck Todd asked the infectious disease expert about the Oval Office meeting on Friday, flashing pictures of Trump and his allies, all maskless in the crowded room.

"This is 30 people in the Oval Office while the president's on speakerphone, and you're seeing nobody's wearing a mask," Todd said. "Not Ambassador [Robert] O'Brien, not Jared Kushner. There's one woman there wearing a mask, and that is it. 30 people, you know the size of that Oval Office. I mean that is a violation of what a good practice is, is it not?"

Fauci noted that "virtually everybody" in attendance was tested prior to the meeting, guessing that this will be the excuse used by White House officials to explain themselves.

Despite the coronavirus tests, however, Fauci also noted that "the image is not optimal for people to see."

Todd later pointed out that Former Republican New Jersey Governor Chris Christie recently wrote a Wall Street Journal op-ed titled "I Should Have Worn a Mask," during which he expressed his regret over going maskless in the White House.

"I mistook the bubble of security around the President for a viral safe zone. I was wrong. There is no safe zone from this virus," Christie wrote after contracting the virus. "It's not a partisan or cultural symbol, not a sign of weakness or virtue. It's simply a good method — not a perfect one, but a proven one — to contain a cough or prevent the virus from getting in your mouth or nose."