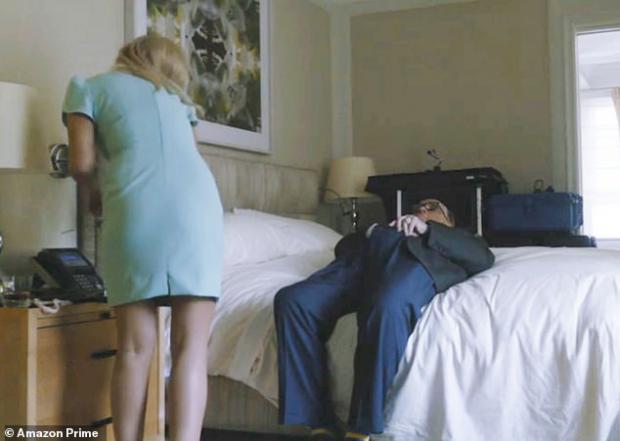 Sacha Baron Cohen has hit back at Rudy Giuliani's claims that the Borat honey trap video is a 'complete fabrication', saying 'heaven knows what he has done with other female journalists in hotel rooms' - as scenes from the full film show him patting a young woman on her hip.

The video, which is a scene from Baron Cohen's Borat sequel film that was released in full on Friday, shows Giuliani in a compromising position in a New York City hotel room alongside a young woman posing as a conservative TV reporter.

In the scene, President Trump's personal attorney is seen patting the woman, who plays Borat's daughter Tutar in the film, on her hip while he sits on the bed.

He is also shown lying on the bed, tucking in his shirt with his hand down his pants as the woman stands nearby.

After a snippet of the scene emerged earlier this week, Giuliani said he was only tucking in his shirt after removing his recording equipment and insisted that he was never 'inappropriate'.

In an interview on ABC's Good Morning America on Friday, Baron Cohen was asked to respond after Giuliani accused him of being a 'stone-cold liar'.

'I would say that if the president's lawyer found what he did there appropriate behavior, then heaven knows what he has done with other female journalists in hotel rooms,' Baron Cohen said.

'I urge everyone to watch the movie. It is what it is, he did what he did. Make your own mind up. It was pretty clear to us.'