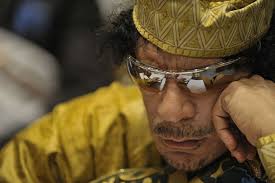 On October 20th, 2011, the West took it upon itself to use NATO to overthrow Libyan leader Muammar al-Gaddafi — not for any humanitarian threat to civilians as had been repeatedly claimed — but because his planned roll-out of a new currency to be used across Africa posed a palpable existential threat to central banks at the heart of the Western financial and political system.

Long theorized to be the actual vehicle for Gaddafi's downfall, the gold dinar-based, pan-African currency motive came to light in nascent 2016 in one of more than 3,000 of Hillary Clinton's emails released by the State Department — conveniently timed with the New Year's holiday to abate outrage or repercussions.

And outrage there should still be — plenty of false posturing in the lead-in to the ultimate overthrow of the Gaddafi regime should sour public trust in the West's geopolitical motives, as a prime example of embroiling itself in unnecessary conflict every time a nation threatens to gain too much independence.

In March 2011, amid heightening rebellion of the Arab Spring, chaos came to Libya's second-largest city, Benghazi — and the West and its allies quickly capitalized on those events to partake in a falsely-premised rebellion of its own.