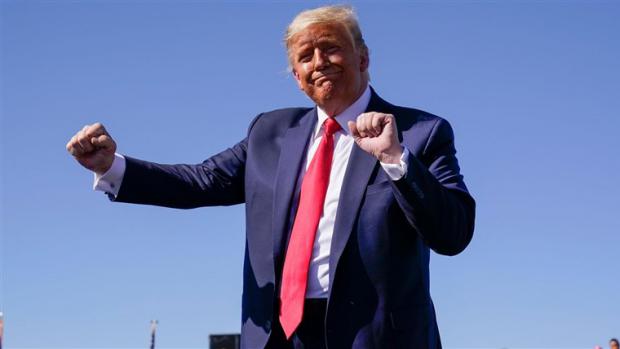 Trump, a man who is famously particular about his appearance, is fully embracing doing a dad dance to the Village People's 'YMCA' as the finale to his rallies in the campaign's closing stretch.

He starts with the arms, clenched fists pumping back and forth — sometimes to the beat — as though he's on an elliptical trainer. He claps. He waves. And then he starts to bop his head and move his knees.

On some nights, he sticks mostly to pointing and clapping. But on others, he lurches from side to side and jerks his body as the crowd cheers.

And now, his stilted dancing has become the latest social media meme.

In one video shared to Twitter, Trump is seen swinging his arms to the beat of a remixed 'Baby Shark.'