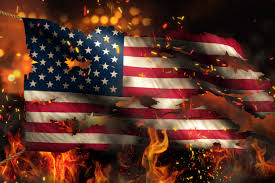 It feels like only a short time ago when I wrote a similar article about post-election chaos in the battle between Donald Trump and Hillary Clinton. And all hell did break loose in cities across the country. While the worst of it was short-lived, it set the scene for four years of contempt, disrespect, and growing disenfranchisement with the opinions of our fellow Americans.

And here we are with another hotly contested election between two candidates that are both deeply scorned by the opposition. We're damned if we do and damned if we don't with regard to this election. Regardless of who wins, chaos is likely to erupt. And with both candidates suggesting they might be unwilling to concede to the other, expect the flames to be fanned by this.

This article is not about Republicans or Democrats or the election process itself. (Although there are articles popping up all over the place that say Russia or Iran or somebody has acquired voter info and is trying to interfere in the election.) It's not about whether our election integrity is still in place.

You need to get prepped. Immediately.

What it all boils down to is that we need to be prepared.

We need to be ready for any unrest that comes about as a direct result of the election – and I really believe that there will be some form of uprising against the result. I hope it will be nothing more than a few minor, isolated incidents, but I can't get past the niggling feeling that all hell is just about to break loose.

This Is How You Avoid Disaster...