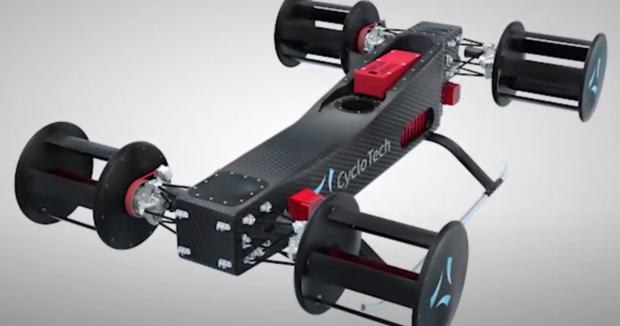 The prop design, which looks a bit like it belongs on the back of an 1850s paddle steamer, was patented nearly 100 years ago but hasn't made it into a production aircraft yet. Each prop is a spinning cylinder whose walls are formed by a number of wing blades.

The secret to the agility of this "Cyclogyro" arrangement is analogous to the way helicopter blades work, continuously altering the angle of the blades as they spin to adjust and direct lift using a "swashplate." In the Cyclogyro arrangement, a mechanical linkage – conrods connected to a central hub – is able to tilt and angle the wing blades as they spin around the cylinder, tilting them gradually into the wind as they reach a certain point in their rotation, and then gradually back to flat as they pass the peak point.

The ability to quickly move that hub and redirect thrust makes this an exceptionally fast-responding system compared to the rest of the eVTOL market, which all need to apply torque and spin rotors up to get the job done. And unlike traditional prop-driven designs, each Cyclogyro's thrust can be directed in any direction on its rotational axis – forward, backward, up, down and anything in between – nearly instantly. So its ability to spin on a dime will be pretty epic if you're looking for a next-generation vomitron.