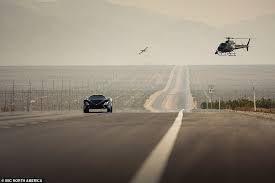 The US maker posted a record average speed of 316.11mph - some 11.34mph faster than the Bugatti Chrion

Bugatti's previous record was already in question having only been clocked one way, rather than driving the same road in opposite directions and an average of the two speeds used, as stipulated under rules

The £1m Tuatara was clocked on 10 October on a 7-mile stretch of State Route 160 outside Las Vegas, Nevada

Speeds were measured by 15 GPS satellites and verified, with British racing driver Oliver Webb at the wheel

Just 100 Tuataras are to be built by SSC with twin-turbo charged 5.9-litre V8 engines producing 1,750bhp

Owner of the car used for the attempt has pledged to donate $316,000 to charity to mark the 316mph record

Poland's EV4 heads to the mountains with electric cart and skateboard

GM Five Year Plan to Be Four Years Behind Tesla

Global Electric Car Sales Has an Annualized 4+ Million in September