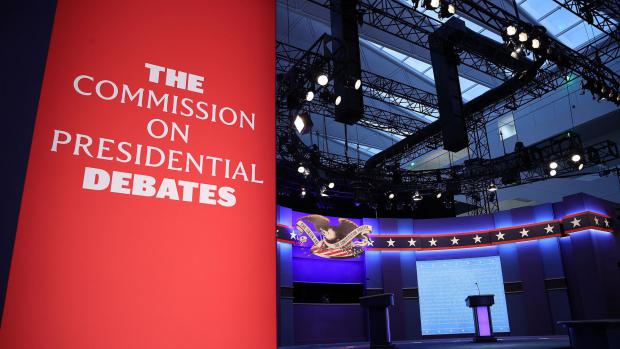 With the final presidential debate just a few days out, Donald Trump and his allies have launched a preemptive strike against its moderator, NBC News White House correspondent Kristen Welker, in an attempt to portray the Thursday contest as rigged from the start. "She's a radical Democrat," Trump told supporters on Monday in Arizona, adding that the journalist has been "screaming questions at me for a long time." The onstage attack follows him tweeting Saturday how Welker has "always been terrible & unfair, just like most of the Fake News reporters, but I'll still play the game."

Such a strategy of trying to intimidate the moderators is part of the Trump playbook. He similarly suggested that Fox News anchor Chris Wallace, who moderated the initial September 29 debate, and C-SPAN's Steve Scully, who was scheduled to oversee the second debate, would treat him unfairly. (Trump refused to participate in the second face-off after it was changed to a virtual format following his COVID-19 diagnosis; it was later cancelled). Despite previously praising Welker and personally congratulating her in January after NBC named her coanchor on Weekend Today, Trump ranted about the reporter in front of his jeering crowds. "She's extraordinarily unfair, but that's alright," he said while speaking at a Janesville, Wisconsin rally on Saturday night.

Earlier this month, Trump campaign adviser Jason Miller also commended Welker's fair reporting, telling Fox News that he has "a very high opinion" of her and thinks "she's going to do an excellent job as the moderator for the third debate. I think she's a journalist who's very fair in her approach and I think that she'll be a very good choice for this third debate." But over the past few days, the opinion of Welker from inside Trumpworld has drastically changed, as the president's personal coalition of the willing has unfurled nearly every attack imaginable to cast the soon-to-be moderator as a secret Democratic weapon planted in the debate to help Joe Biden and make the contest two against one.

"The Debate Commission is nothing more than an accomplice to the Radical Dems in their efforts to rig the 2020 election," tweeted Lou Dobbs, one of Trump's favorite Fox personalities. "Next debate moderator, another with deep Democrat ties," tweeted right-wing talk radio host Mark Levin, who also has a show on Fox News. Hours before Trump mocked Welker's voice during a Monday stump speech, the hosts of Fox & Friends used that same line of attack first. "She's often the most abrasive, most dismissive, most disrespectful reporter in all those briefings," said Fox's Brian Kilmeade during a segment that featured a montage of Welker simply asking the president questions--the task that White House reporters are known to do. Former GOP House Speaker Newt Gingrich predicted that Welker "won't be objective" in the debate. "[NBC town hall moderator] Savannah Guthrie's bias against President Trump will probably be exceeded by Kristen Welker's bias at the next debate," Gingrich tweeted, adding that Welker's "family gave thousandds of doillars to Obama, Clinton and Biden [sic]," before citing the Democratic voter registration that she has reportedly held in the past as more damning evidence against her credibility—though Fox's Tucker Carlson and Wallace are also registered Democrats, as it is the only way to cast a meaningful vote in local Washington, D.C. elections.

Welker and NBC News have not replied to the criticism from Trump and his high-profile supporters, but some of her colleagues in the White House press corps have vouched for her professionalism. CBS News reporter Kathryn Watson described Welker as "one of the toughest, fairest reporters you'll ever meet" while calling "B.S." on the conservative-media attacks against her colleague's credibility. Former Bill Clinton White House press secretary Joe Lockhart commended Welker as "a real pro," but also pointed out that Trump "agreed to her as the moderator" before he began ramping up his all-out assault. Lockhart, who has significant experience working with the White House press corps, responded to Trump's most recent shot against Welker for "screaming" by noting that while all reporters assertively shout questions at presidents, she is being singled out because "only the women of color get called out for it." In response to Fox News picking up a New York Post story that painted Welker as a Democratic Party operative of sorts—citing her parents' contributions to Democratic campaigns as evidence of such bias—CNN anchor Jake Tapper called the coverage "hideous and unjournalistic," adding, "If any other outlet started covering the political donations of *the parents* of folks who work at Fox there would be widespread outrage and rightly so."