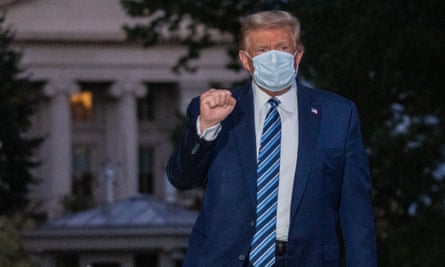 According to a report1 by Science Magazine, the President was transferred to Walter Reed National Military Medical Center in Bethesda, Maryland, that same day. His symptoms included fever, fatigue and congestion.

According to his doctors, he also experienced a temporary drop in oxygen saturation level, from the normal 98% to 93%, and was given supplemental oxygen before being transported to Walter Reed.2 As a general guideline, medical care is recommended if your oxygen saturation is below 94%.3

Melania Trump opted to rest and self-isolate in the White House.4 Her symptoms, which were reportedly milder than the president's, included mild cough and headache. No news has emerged regarding her course of treatment.

According to reports, President Trump has been given a variety of treatments, including both holistic alternatives and experimental drugs, prompting some health professionals to question why they're "throwing the kitchen sink at him." While aggressive and early treatment is strongly recommended, certain remedies are best used at specific times during the disease process.

Peak viral replication takes place at the earliest signs of symptoms, which include cold/flu-like symptoms, loss of taste and smell, myalgia (muscle pain) and general malaise. At this time, the focus should be on antiviral therapies. Anti-inflammatories (which is what steroids are) should be avoided, as you don't want to dampen your immune system at this stage.