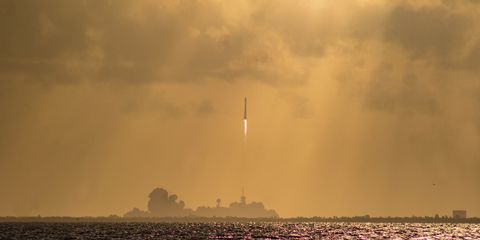 The Pentagon is contracting Elon Musk's SpaceX to develop rockets that can deliver packages anywhere on the planet in under an hour. The Pentagon announced the partnership during a virtual meeting on October 7.

"Think about moving the equivalent of a C-17 payload anywhere on the globe in less than an hour. Think about that speed associated with the movement of transportation of cargo and people," U.S. Army General Stephen R. Lyons—commander of U.S. Transportation Command—said during the event. "There is a lot of potential here."

U.S. Transportation Command (USTRANSCOM) is the backbone of the American military. One of the things that makes the U.S. military a dominant global fighting force is its ability to move troops, weapons, and supplies quickly to where they're needed. C-17 transport planes soar across the globe delivering troops and weapons where they're needed. But America isn't making any more C-17s, so while demand for logistics in the military is up, the supply of vehicles designed to carry stuff around the planet is down.

To fill the logistical gap, USTRANSCOM wants SpaceX to build rockets it can quickly fire around the globe.

"For the past 75 years or so, we have been constrained to around 40,000 feet altitude and 600 miles per hour in our very fastest method of logistics delivery—airlift," USTRANSCOM deputy commander U.S. Navy Vice Admiral Dee Mewbourne said during the event announcing the plan. "What are the possibilities for logistical fulfillment at about 10 times those figures, when the need for support on the other side of the world is urgent?"