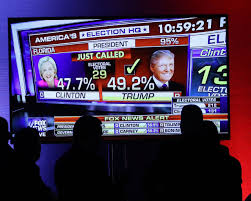 Currently, the major polls give former Vice President Biden more than a 9-point lead nationally against President Trump – according to RealClearPolitics National Average.

And the Predictit markets imply a 67% probability of Biden winning on November 3rd. Additionally, those markets suggest that Democrats will win both the Senate and House (66% and 88% probabilities, respectively). Quite simply, it appears that a Blue Wave is fast approaching, something which the market has not only priced in, but has successfully digested as a favorable narrative for risk assets.

It would be easy to simply close the books and call the November contest over. But, of course, the major polls were all wrong in 2016; notably about the presidential race.

In the following Election Review from Camelot Portfolios, we look at what some of the polling firms that called 2016 correctly are seeing today. "Shocking", their polling suggests that President Trump will be re-elected, either narrowly or by a large margin. Therefore, as Camelot notes, "capital allocators today cannot easily assume next month's results."

It's very possible that Trump will win Florida, North Carolina and Arizona. If so, a win in Pennsylvania or Michigan will likely put him over the top in the electoral college. And speaking of "shocking", Camelot notes that as far as the Senate and House are concerned, it also appears that Republicans will keep control of the Senate, especially if Trump has a strong night. On the other hand, the House is highly likely to remain in Democratic control.