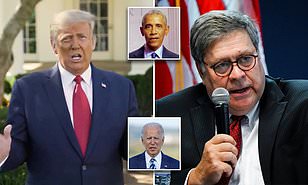 (Natural News) Documents that were recently declassified by Director of National Intelligence John Ratcliffe show that John Brennan, who was the director of the CIA at the time, briefed President Obama on a plan by Hillary Clinton to connect Donald Trump to Russia when he was running for president as "a means of distracting the public from her use of a private email server" in the run-up to the election.

This is according to handwritten notes taken by Brennan after briefing Obama on CIA intelligence about the matter as well as a CIA memo that showed officials turned the matter over to the FBI for investigation. The notes were part of several documents that were declassified and sent to the Senate and House Intelligence Committees by the Office of the Director of National Intelligence.

Brennan's notes stated: "We're getting additional insight into Russian activities from [REDACTED]. CITE [summarizing] alleged approved by Hillary Clinton a proposal from one of her foreign policy advisers to vilify Donald Trump by stirring up a scandal claiming interference by the Russian security service."

Many of the rest of the notes are redacted, although the names "JC," "Susan," and "Denis" appear in the margins. Fox News speculates that "JC" is referring to James Comey, who was the director of the FBI at the time, while "Susan" is likely National Security Adviser Susan Rice and "Denis" may be Obama's chief of staff, Denis McDonough. It is believed that these individuals were present during the meeting where Brennan discussed this topic with Obama.

There was also an annotation in the notes that appears to indicate Obama was interested in seeing "any evidence of collaboration between Trump campaign + Russia."

Last week, other declassified information shared with the Senate Judiciary Committee by Ratcliffe showed that intelligence officials forwarded an investigative referral pertaining to Hillary Clinton approving "a plan concerning U.S. presidential candidate Donald Trump and Russian hackers hampering U.S. elections" as a distraction from her email scandal in September 2016. The referral went out to Comey as well as the Deputy Assistant Director of Counterintelligence at the time, Peter Strzok.