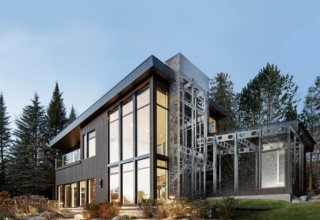 The Canadian company Bone Structure can produce zero net energy homes months faster than a traditional builder. But its challenges highlight the difficulty of disrupting the entrenched construction industry.

Marc A. Bovet wanted to build a house, but when it came to the actual construction, he was overwhelmed with options. He had bought an empty lot and hired an architect to design a custom home in Montreal for his wife and four kids. He had all the permits and approvals, so he began looking for builders. When quotes started coming in, he was stunned to see that the highest estimate was almost twice as expensive as the lowest.

That experience led Bovet to develop a system that uses robotic manufacturing to wring inefficiencies out of the building process. Though about 15 years old, the system is taking on new urgency as climate emergencies like wildfires force more and more homeowners to rebuild. But the system has limitations that underscore the wildly complex nature of the construction industry. Prefab methods, like Bovet's, have long been held up as a solution to a range of housing problems. But in building and construction, there's no easy fix.

An entrepreneur who had run a men's clothing line and marketing agency before becoming director at the international transportation company Bombardier, Bovet had a sense for production. The bids he was getting for his home project seemed completely arbitrary, and he wanted to understand why. So he started showing up to construction sites and asking contractors questions about the building process. Almost every question he asked got a different answer at each building site. There was no standard building approach, and the ultimate cost to build his house would depend primarily on however his builder chose to embark on the project. For Bovet, this seemed like a problem that needed solving.