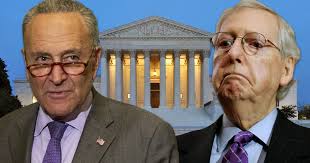 "I'm planning on moving to the nomination as soon as it comes out of committee," McConnell said at a recent press conference in Kentucky. His determination came in response to a question on whether the full Senate confirmation vote would take place before Election Day.

McConnell had previously said he planned to hold a vote on Amy Coney Barrett during President Trump's term but did wasn't specific on whether the vote would take place before or after the November election.

The Senate Majority Leader's statement comes as congressional Democrats are using every tool at their disposal to delay and derail Barrett's confirmation to the high Court.

"We now have two members of the Senate Judiciary Committee who have tested positive for COVID, and there may be more. I wish my colleagues well," Schumer tweeted. "It is irresponsible and dangerous to move forward with a hearing, and there is absolutely no good reason to do so."