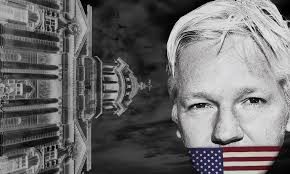 Q:  Having watched Julian Assange's trial firsthand, can you describe the prevailing atmosphere in the court?

The prevailing atmosphere has been shocking. I say that without hesitation; I have sat in many courts and seldom known such a corruption of due process; this is due revenge. Putting aside the ritual associated with 'British justice', at times it has been evocative of a Stalinist show trial. One difference is that in the show trials, the defendant stood in the court proper. In the Assange trial, the defendant was caged behind thick glass, and had to crawl on his knees to a slit in the glass, overseen by his guard, to make contact with his lawyers. His message, whispered barely audibly through face masks, was then passed by post-it the length of the court to where his barristers were arguing the case against his extradition to an American hellhole.

Consider this daily routine of Julian Assange, an Australian on trial for truth-telling journalism. He was woken at five o'clock in his cell at Belmarsh prison in the bleak southern sprawl of London. The first time I saw Julian in Belmarsh, having passed through half an hour of 'security' checks, including a dog's snout in my rear, I found a painfully thin figure sitting alone wearing a yellow armband. He had lost more than 10 kilos in a matter of months; his arms had no muscle. His first words were: 'I think I am losing my mind'.

I tried to assure him he wasn't. His resilience and courage are formidable, but there is a limit. That was more than a year ago. In the past three weeks, in the pre-dawn, he was strip-searched, shackled, and prepared for transport to the Central Criminal Court, the Old Bailey, in a truck that his partner, Stella Moris, described as an upended coffin. It  had one small window; he had to stand precariously to look out. The truck and its guards were operated by Serco, one of many politically connected companies that run much of Boris Johnson's Britain.

The journey to the Old Bailey took at least an hour and a half. That's a minimum of three hours being jolted through snail-like traffic every day. He was led into his narrow cage at the back of the court, then look up, blinking, trying to make out faces in the public gallery through the reflection of the glass. He saw the courtly figure of his dad, John Shipton, and me, and our fists went up. Through the glass, he reached out to touch fingers with Stella, who is a lawyer and seated in the body of the court.

We were here for the ultimate of what the philosopher Guy Debord called The Society of the Spectacle: a man fighting for his life. Yet his crime is to have performed an epic public service: revealing that which we have a right to know: the lies of our governments and the crimes they commit in our name. His creation of WikiLeaks and its failsafe protection of sources revolutionised journalism, restoring it to the vision of its idealists. Edmund Burke's notion of free journalism as a fourth estate is now a fifth estate that shines a light on those who diminish the very meaning of democracy with their criminal secrecy. That's why his punishment is so extreme.

The sheer bias in the courts I have sat in this year and last year, with Julian in the dock, blight any notion of British justice. When thuggish police dragged him from his asylum in the Ecuadorean embassy—look closely at the photo and you'll see he is clutching a Gore Vidal book; Assange has a political humour similar to Vidal's—a judge gave him an outrageous 50-week sentence in a maximum-security prison for mere bail infringement.

For months, he was denied exercise and held in solitary confinement disguised as 'heath care'. He once told me he strode the length of his cell, back and forth, back and forth, for his own half-marathon. In the next cell, the occupant screamed through the night. At first he was denied his reading glasses, left behind in the embassy brutality. He was denied the legal documents with which to prepare his case, and access to the prison library and the use of a basic laptop. Books sent to him by a friend, the journalist Charles Glass, himself a survivor of hostage-taking in Beirut, were returned. He could not call his American lawyers. He has been constantly medicated by the prison authorities. When I asked him what they were giving him, he couldn't say. The governor of Belmarsh has been awarded the Order of the British Empire.

At the Old Bailey, one of the expert medical witnesses, Dr Kate Humphrey, a clinical neuropsychologist at Imperial College, London, described the damage: Julian's intellect had gone from 'in the superior, or more likely very superior range' to 'significantly below' this optimal level, to the point where he was struggling to absorb information and 'perform in the low average range'.