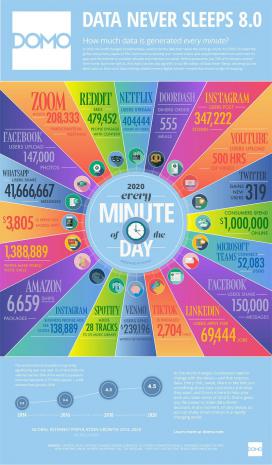 This powerful visual from Domo helps capture what happens each minute in today's hyper-connected internet era, and it's actually the eighth edition produced since the year 2012.

What can we learn from the evolution of what happens in an internet minute?

How Times Have Changed

Over its relatively short history, the internet has been a catalyst for both the rise and demise of new companies and platforms.

By looking at which brands have appeared in the graphic in earlier years, we can roughly chart the prominence of certain tech segments, as well as observe brands with the most staying power.

As you can see above, platforms like Tumblr, Flickr, and Foursquare showed some promise, but eventually got omitted from the graphic as they dropped off in relevance.

Meanwhile, tech companies like Facebook, Amazon, and Google have had impressive staying power, evolving to become some of the biggest companies in the world. In the process, they've caught up to longer-standing titans like Apple and Microsoft at the top of the food chain.