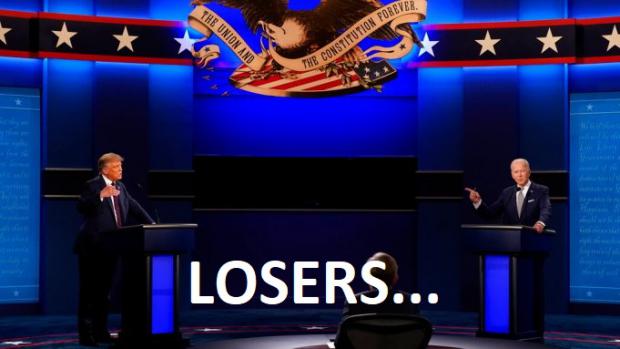 Voters already camped in their support for their candidate would have no reason to change their mind, at least not tonight.  This is one of those debates that needed a streaker to run across the stage to bring some needed levity.   Maybe a streaker wearing a Nancy Pelosi mask.

Joe Biden surprisingly appeared mentally sharp and on point.  President Trump played bully in  the debate at times, to the point of being a bit rude, but not fully realizing it's not the facts, it's the way a candidate expresses the facts.  Sensitive viewers are looking for empathy for the little guy, not toughness.  Viewers are searching for any hint a candidate is, underneath, a phony.

I can sense viewers are waiting for either candidate to take a big fall… to blunder themselves out of the election.

But President Trump doesn't carry the working classes this time, nor the coal miners and oil field workers.  This time Trump has a bunch of boat and truck owners on his side.  Great! :{

Trump is pressing on the idea a COVID-19 vaccine will be available if the US allows the drug companies to proceed.  But most Americans are wary of a vaccine.  And there may never be a successful coronavirus vaccine — pharma companies haven't been able to achieve licensure of a coronavirus vaccine in the past decade.

Now Trump is saying the economy should open up… now he is finally making points, but 40 minutes into the debate.

Now Trump is punching hard…….. he barks at Biden… "the mayor of Moscow's wife gave you $3.5 million."   Below the belt. That one hurt.

Biden calls Trump a clown.  Americans don't like their Presidents being ridiculed.

Biden chides Trump for holding up a Bible in front of a church after the George Floyd death.  Trump does like to showboat, as if anybody doesn't know that already.

Biden bites back: "If he doesn't do something quickly, COVID will kill 1 in 5 African Americans."  Joe, what would you do?  The answer is to provide them vitamin D pills, but neither candidate has the intellect or that.

Trump says law enforcement is on his side.  Now Trump is ringing true… solve the problem in the streets that Americans see on TV.  "We believe in law and order, you don't," says Trump to Biden.  The American people want law and order, he says.

Biden: "There is systemic racism in this country.  I'm going to call people to the White House to work this out.  We have to have a system where people are held accountable."  A love fest in the Oval Office?  Just what America needs.  Do both sides get to bring in their automatic weapons?