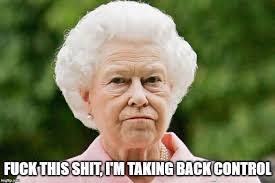 As The Economist points out, this is "fairly small beer" set against the £13.4 billion valuation of the Queen's property portfolio, which includes some of London's toniest real estate.

But the Queen will not be left out of pocket, since her income — set at 25% of the profits generated by the Crown Estate — will be topped up with a taxpayer bailout. In fact, thanks to the Sovereign Grant Act of 2011, the overall amount given to the Queen each year in order to fund her official duties is never allowed to fall, regardless of what is happening in the broader economy.

"In the event of a reduction in the Crown Estate's profits, the sovereign grant is set at the same level as the previous year," a spokesperson told The Independent.

"The revenue from the Crown Estate helps pay for our vital public services – over the last 10 years it has returned a total of £2.8 billion to the Exchequer."

Any profits made by the Crown Estate are passed to the Treasury which, in turn, hands 25% of the profits back to the Queen through the sovereign grant. This year, things will be a little different. To cover the fall in value of the Crown's Estate, the estate has struck an agreement with the Treasury that allows it to begin making "staggered" revenue payments to the government, thus keeping a larger share of the profits to itself.