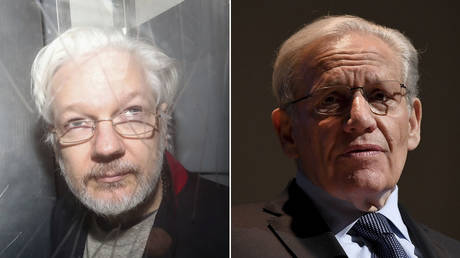 Seeing as Julian is kept in a glass container in the courtroom, like a captured cockroach, maybe Kafka wins the day.

The court clearly must keep Julian in that giant Tic-Tac container because he's undoubtedly as dangerous as Hannibal Lecter. If he weren't in there, no one would know when he might lurch forward and PUBLISH SOMETHING THAT'S TOTALLY TRUE!

What they're deciding in this trial is whether Assange should be extradited to the United States, or "kidnapped" as the kids call it these days.

If he is lovingly black-bagged by our government, they have promised he will face 175 years in prison if convicted by another super rad show trial presided over by an American government puppet judge. (A puppet judge is just like a real judge but they've got the government so far up their backside they can taste the Cheetos.)

But all the people saying that are… um… correct. Yeah, they nailed it. (Sorry for the buildup – I thought that paragraph would come out differently.)

Two Journalists
Right now, one journalist, Julian Assange, is on trial while being held in a maximum security prison in London. Another journalist, Bob Woodward, is in a very different situation. The liberal Establishment is preparing to chisel his likeness out of a small boulder and display it next to the Lincoln Memorial. They love him because he got President Donald Trump to do interviews wherein Trump, as always, sounds like a lying buffoon. Among other things the president admits he knew Covid-19 was "deadly stuff" back in at least February, but played it down anyway.