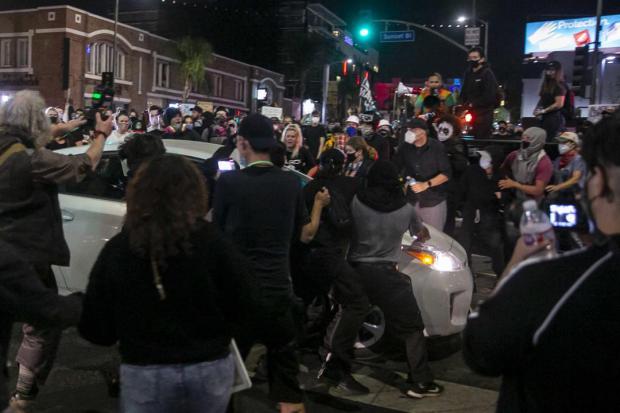 "It wasn't traveling at a fast speed — it was inching forward, trying to get past, and that upset people," said photojournalist Christian Monterrosa.

People in the crowd began striking the car's windows and doors, the news footage shows. After the Prius cleared the crowd, a black pickup truck with several people sitting in the bed gave chase, accelerated ahead of the Prius and pulled to an abrupt halt. A man got out of the truck and, according to the footage, appeared to try to pull the driver out of the Prius.

The Prius reversed and collided with a green Mustang convertible, which was associated with the protest, according to the LAPD. A person got out of the convertible and began striking the Prius with a flagpole, the footage shows, and another person arrived on a skateboard, which he used to smash the Prius' windshield. The motorist drove off but was detained a few blocks away by the LAPD. No one was injured in the incident, according to police. -Los Angeles Times

According to the Los Angeles Police Department (LAPD), approximately 300 people gathered near the Hollywood Forever Cemetery before marching through Hollywood.