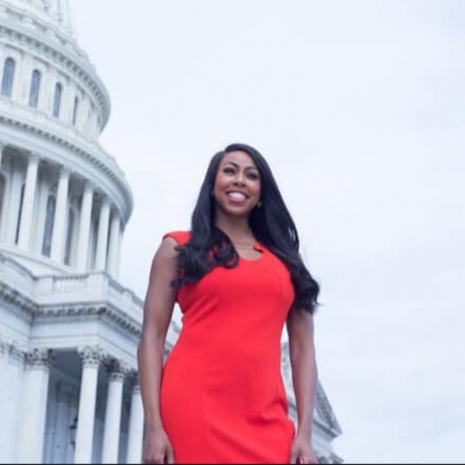 Her latest video, which debuted on Monday, shows that she may be Alexandria Ocasio-Cortez's worst nightmare: a black conservative woman who exposes how identity politics is bad for minorities. Her red heels walked through the burned-out streets of Baltimore in her first video titled "Black Lives Don't Matter to Democrats," which has racked up more than half a million views on YouTube.

In her new ad, "The Plan," she shows her vision of graffiti disappearing, run-down buildings revitalized, and black families going home from their new jobs to sleep in a safe neighborhood.

Nothing could be further from the views of Rep. Alexandria Ocasio-Cortez, D-N.Y.

Ocasio-Cortez—who grew up in wealthy Westchester County and called herself "Sandy" when she attended elite Boston University—supports socialism, violent riots, and the wholescale dismantling of police forces across the nation. "Defunding police means defunding police," she said. She called New York City's massive reduction in NYPD funding a "disingenuous illusion."

But Klacik says if you defund the police, "Who do you think that crime is going to be perpetrated against? Other black people. We are then the prey even more." "We need more funding. We need more recruiting," she said. "So, this 'defund the police' narrative makes absolutely no sense."