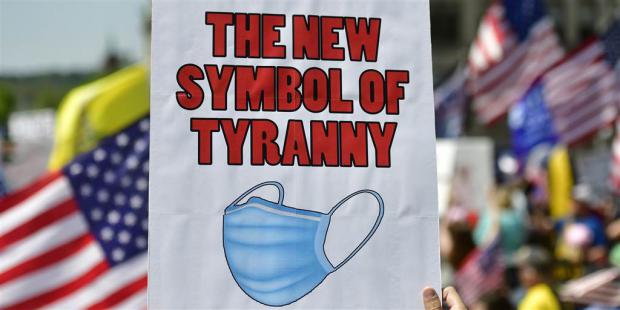 If the WuFlu were the dire omnipresence it's asserted to be – which assertion flies in the face of the facts, but never mind – then surely any old piece of cloth would not qualify. Nothing less than one of those fairly pricey respirators would be the least people would have to wear.

Plus goggles. Which wouldn't be silly, if the WuFlu were, in fact, the dire omnipresence it's asserted to be. But almost no one Goggles – to prevent the exposed surface of your eyes from having virus particles enter your system that way. A wide-open vector for the much-dreaded "spread."

The Gesundheitsfuhrers do not mandate it; CDC is silent.

Which tells you everything about the "dire omnipresence" of the WuFlu.

Yet almost everyone Diapers – literally. They don't "PPE" – unless you believe any old piece of cloth protects your person from viruses, which is the same as believing that not stepping on sidewalk cracks will keep your momma's back intact.

It's a neurotic habit, normalized via habituation and social pressure.

And it's a show – of submission.

Which is the dire omnipresence.

If you're Undiapered; if you refuse to play-pretend that death is in the air and that a dirty old bandana or "mask" that comes out of a box on which it plainly states that it does not protect against the transmission of viruses somehow does, in the manner of keeping your momma's back intact by not walking on sidewalk cracks.

At Kroger the other day, I felt the dire omnipresence of being almost the only person in the store not play-pretending. Diapers abounded. The effect is depressing. The Diaper turns everyone who wears it into the same person, differing only in shape.

But the same face. No expression to read. A dreary unanimity. The Germans had a word for this, as they had for many unpleasant things, which does not directly translate but conveys the thing exactly in a way that English does not.