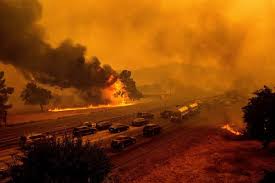 California wildfires continue to blaze in one of the worst fire seasons in recent memory. While California fires are nothing new, government data show the damage has been substantial.

The California Department of Forestry and Fire Protection says that since August 15, when California's fire activity accelerated, there have been at least 24 fatalities and more than 4,200 structures destroyed. (Ten people have also died in Oregon, CNN reports.) So far in 2020, California wildfires have burned more than 3.2 million acres of land—an area roughly the size of Connecticut.

As the fires rage, politicians argue over what (and who) is to blame.

These answers are not mutually exclusive, of course, and evidence suggests that both poor land management and California's high temperatures and arid climate have played a role.