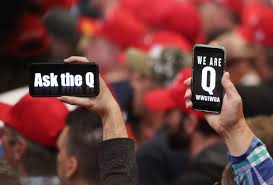 For nearly three years, QAnon followers have been feverishly deciphering thousands of cryptic clues and predictions posted online by the shadowy persona of "Q" at the center of a metastasizing movement that experts say is the first far-right extremist conspiracy theory in the modern era to penetrate mainstream American culture and Washington politics.

Yet, a consensus of leading researchers and critics who study and debunk QAnon disinformation told ABC News that a key to identifying "Q" has been hiding in plain sight for years -- on a pig farm south of Manila in the Philippines -- at least until recently.

The rapid online growth of QAnon since early spring -- and a series of trolling incidents that surged through Twitter, Facebook, Instagram and TikTok before those platforms began banning QAnon groups and hashtags this summer -- has sharpened focus on the forces behind this alternative reality game-like phenomenon.

At least 24 candidates who have "endorsed or given credence to the conspiracy theory or promoted QAnon content" -- 22 Republicans and two independents -- have secured a spot on the ballot in the 2020 congressional elections, according to the media watchdog Media Matters, though it remains unclear how many could actually win their races. Last month, one candidate who pollsters say is almost certain to win her heavily GOP district in Georgia, Marjorie Taylor Greene, appeared to rescind her previous support for QAnon, telling Fox News that "once I started finding misinformation, I decided that I would choose another path."