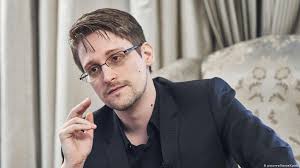 CIA whistleblower Edward Snowden has agreed to forfeit more than $5million from book proceeds and speeches to the US government, according to court records.

The 37-year-old, who leaked intelligence secrets in 2013, published a book last year without government approval which breached contracts he had signed with the CIA and the National Security Agency.

The Justice Department brought a lawsuit against Snowden which has since been upheld by a federal judge - but a forfeiture plan has not yet been approved.

Snowden has so far raked in $4.2million (£3.3milion) from sales of his book, titled Permanent Record, as well as royalties and related rights.

He also gave 56 paid speeches for an average fee of $18,000 - making nearly $1.03million alone from these public appearances.

It is thought that these speeches also involved disclosures of confidential information that once again breached his government secrecy agreement.

Snowden has agreed a plan with the Trump administration, which was filed in court on Tuesday, to pay back the sum into a trust.

But the agreement does not mean that the US government will be able to access the money immediately as he is considering appealing the judge's previous decision that he was liable for the confidentiality breaches.