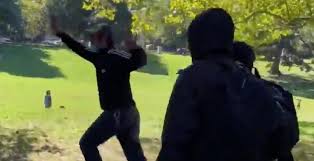 Just when we thought we had seen peak boredom from America's misinformed Marxists disguised as some kind of anti-fascist freedom fighters, three new videos out of Philadelphia have surfaced showing that now, more than ever, there's too many art students and unemployed millennials that need to find hobbies.

The first video shows a group of several people chasing a man through a park.

"Holy shit you made a bad mistake," one 'protester' says before another, cloaked in a hood of what appears to be a $500 REI jacket, tries to kick the man they're chasing and then falls over.

The man then jogs in the other direction and appears to get away from his "bad mistake", whatever it was, scot-free.

A second video out of Philadelphia shows a man that a mob reportedly chased to his car. And by "mob", we naturally mean a group of what appears to be kids in their early 20s, replete with the full Antifa halloween costume of black hoods and masks.

"Fuck off Nazi scum," the supposed "protesters" can be heard saying.

"Get the fuck out of here!" someone yells while other mob members kick and dent the person's car repeatedly. When the car drives off, after being dented and damaged, someone throws a rock at its back window.

A third video shows a different angle of the assault, showing there was a dog in the back of the SUV at the time.