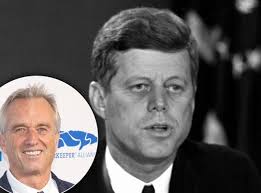 Nephew of President John F. Kennedy, son of Robert F. Kennedy, and tireless crusader against the tyranny of the mainstream medical establishment, Robert F. Kennedy, Jr. joins today's Liberty Report to discuss his startling discoveries about who really killed his father and uncle…and why.

Plus, Mr. Kennedy, an environmental lawyer, has been among the most vocal and most successful opponents of the mainstream medical establishment, driven by big Pharma to inoculate and medicate everything that moves.

Biran Shilhavy has the story.

Mr. Kennedy begins by mentioning a book he has written, American Values, which he says documents his family's almost 75-year battle with the CIA.

He says the fight with the CIA started in the mid 1950s when President Truman asked his grandfather, Joseph Kennedy, to serve on a commission called "The Hoover Commission."

He tells the Liberty Report how he very reluctantly decided to dedicate his career to fighting the mandatory vaccines that have resulted in so many documented injuries to the recipients.