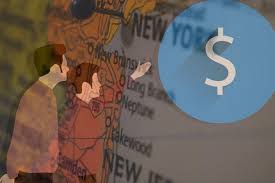 ... On Thursday morning, Jersey Governor Phil Murphy and Democratic leaders agreed on a budget deal that will raise taxes on millionaires, sparking another exodus from a state which has already seen many of its richest residents - such as David Tepper - depart for more hospitable states.

As the NYT gloats, "Gov. Philip D. Murphy campaigned on a vow to raise taxes on the rich in New Jersey. It took three years and a pandemic to get it done." Clearly the NYT has any idea just how worse off the state will be in a few years as a result of sliding real estate prices and broadly lower tax revenues.

Murphy, a former Goldman Sachs executive and fervent Democrat who took over as NJ governor from Chris Christie in 2018, was expected to announce on Thursday morning a deal that includes a higher tax rate for residents earning more than $1 million a year. In keeping with Murphy's social justice warrior ambitions, the agreement also includes a $500 rebate for families with at least one child and an annual income of less than $150,000 a year for couples and $75,000 for single parents. The new tax is expected to generate an estimated $390 million this fiscal year, while the $500 rebate is expected to cost about $340 million a year.

"Blink and you'll miss the next Trenton tax hike," the state's Republican chairman, Doug Steinhardt, said in a statement. "That's how fast Phil Murphy and his Democrats are spending your money."

New Jersey must have a budget in place for the Oct. 1 start of the revised fiscal year, a nine-month cycle. The current fiscal year was lengthened by three months amid uncertain revenue during the novel coronavirus pandemic. The new spending plan includes $4 billion in borrowing to plug a revenue gap.