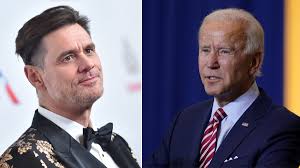 "You'll see the same people. I mean, Maya Rudolph is coming back, and Alec [Baldwin] will be back. And Jim Carrey is going to do Biden," SNL boss Lorne Michaels told Variety, adding that Carrey had expressed interest in the role. "It came down to discussions of what his take was … He will give the part energy and strength, and [Laughs] hopefully it's funny."

The new season, which debuts October 3rd, will feature Carrey and three other new cast members as producers plan to launch the show's return with a "limited" studio audience.

New members of the cast include Upright Citizens Brigade alum Lauren Holt (Parent-Teacher Conference), stand-up comic and actress Punkie Johnson (Space Force, Bill Burr Presents: The Ringers), and Andrew Dismukes, who has worked as a writer on the show for the past three seasons.

The series will begin just over a month before the 2020 presidential election, with five consecutive episodes scheduled in the run-up to election day. Regular cast members are all expected to return, including Alec Baldwin in his role as President Donald Trump.

Similar to Baldwin and many other cast members, Carrey is a fanatic Trump-basher and regular Republican Party hater. Since the onset of the Trump presidency, he has produced dozens of artworks depicting the president, his family, colleagues, and supporters in extremely graphic and vulgar scenarios.