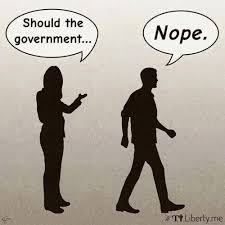 There probably isn't one.

Libertarianism is not and does not pretend to be a complete moral, or aesthetic theory; it is only a political theory, that is, the important subset of moral theory that deals with the proper role of violence in social life. Political theory deals with what is proper or improper for government to do, and government is distinguished from every other group in society as being the institution of organized violence. Libertarianism holds that the only proper role of violence is to defend person and property against violence, that any use of violence that goes beyond such just defense is itself aggressive, unjust, and criminal. Libertarianism, therefore, is a theory which states that everyone should be free of violent invasion, should be free to do as he sees fit except invade the person or property of another. What a person does with his or her life is vital and important, but is simply irrelevant to libertarianism.

For a compact definition of libertarianism, here is Future of Freedom Foundation president Jacob Hornberger:

Libertarianism is a political philosophy that holds that a person should be free to do whatever he wants in life, as long as his conduct is peaceful. Thus, as long a person doesn't murder, rape, burglarize, defraud, trespass, steal, or inflict any other act of violence against another person's life, liberty, or property, libertarians hold that the government should leave him alone. In fact, libertarians believe that a primary purpose of government is to prosecute and punish anti-social individuals who initiate force against others.

I myself have written the following about libertarianism:

Libertarianism is the philosophy that says that people should be free from individual, societal, or government interference to live their lives any way they desire, pursue their own happiness, accumulate wealth, assess their own risks, make their own choices, participate in any economic activity for their profit, engage in commerce with anyone who is willing to reciprocate, and spend the fruits of their labor as they see fit. As long as people don't violate the personal or property rights of others, and as long as their actions are peaceful, their associations are voluntary, and their interactions are consensual, they should be free to live their lives without license, regulation, interference, or molestation by the government.

Yet, conservatives, liberals, moderates, and progressives—and even some libertarians—have made libertarianism more complex than it is by confusing it with elements of liberalism or conservatism, reading into it what they think it means, expanding it beyond what it professes to be, ascribing to it what its critics have falsely said about it, or equating it with the absence of morality.