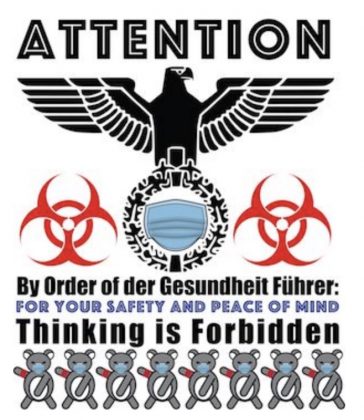 In Virginia and many other states now under Medical Martial Law, Gesundheitsfuhrers have issued orders that Diapers Muss Sein (everyone must wear a Face Diaper). At the same time, these orders have an exemption from Diapering. Here is the letter of the law, so to speak. So to speak because no laws have actually been passed; rather orders regarding "guidelines" are being enforced.

Here's the verbatim exemption from the order:

Italics added to make the point. Which is that the Gesundheitsfuhrers know they haven't got lawful authority to order mandatory Face Diapering contrary to actual laws, among these the federal Americans with Disabilities Act (ADA) and the Health Insurance Portability and Accountability Act (HIPAA). The former requires all businesses that do business with the public to accommodate – that is to say, serve – those with medical and other disabilities while the latter protects the privacy of medical information. A business cannot refuse service, in other words, on account of a person's disability nor require disclosure/proof of the disability.

Bu the problem is that private businesses can – and are – asserting their own orders that Diapers Muss Sein for everyone – no exemptions – and curiously enough, the Gesundheitsfuhrers aren't doing anything about this violation of the law.

But of course, they would do something if businesses refused to admit/serve blacks, say. Which is also very much against the law.

The disparity exists for the same reason that an armed government worker (AGW) can issue you a ticket for "speeding" and not wearing a seatbelt while he himself ignores both speed limits and buckle-up laws and is permitted to shoot people without the same justification required of you and is held to a much lower standard of conduct if he does.

It is why those who imposed Obamacare on you and I are exempted from Obamacare.

It's about the possession and assertion of power, in other words.