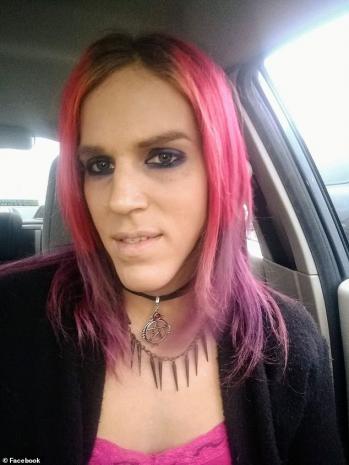 A transgender woman who describes herself as a 'Satanic anarchist' has won the Republican Party nomination for sheriff in a New Hampshire county after running on a platform of 'F*** the police.'

'I can't imagine they're happy about this,' Aria DiMezzo told Inside Sources when asked about the reaction from Republicans.

DiMezzo captured the GOP nomination for Cheshire County sheriff on Tuesday night after she ran unopposed in the party primary.

She won despite the fact that she received no support from the county or state GOP.

DiMezzo will have an even more formidable task as she will face off against a four-term incumbent, the Democrat Eli Rivera.

The head of the Cheshire County Republican Party, Marylin Huston, misgendered DiMezzo by referring to her as 'he' when she offered congratulations.

'He did very well with the primary and that was wonderful,' Huston said.

DiMezzo is a member of a group of Libertarian activists known as the Free Keene group.

During the recent GOP primary for governor, the group backed Rich Paul, who legally changed his name to Nobody.

while it is clear that this candidate has no regard for the office she/he is running for. Just as bad is any republican voting her/him in. Then complain about it. At least the candidate was honest about the positions even if it is screwed up. This shows how ignorant voters can be as well as lazy. Also I think that some but not all may have voted in the primary who were not republicans. I think if you do not have a stated party you can chose to vote in NH primary for the party you wish to