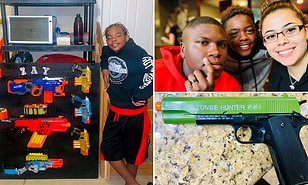 A 12-year-old Colorado boy was suspended and the police were called to his home after he waved a toy gun during a virtual class.

Seventh grader Isaiah Elliott, who is a student at Grand Mountain School in Colorado Springs, was attending his virtual art class on August 27, when he briefly held the toy gun in his hand.

His mother, Dani Elliott, told BuzzFeed News that her son had picked up the neon green toy gun and moved it from one side of his computer screen to the other.

It wasn't until after the class that Dani received an email from her son's art teacher.

Dani told BuzzFeed that the teacher said Isaiah had been 'extremely distracted' and that there had been 'a very serious issue with waving around a toy gun'.

The teacher informed Dani that she had reported the incident to the school's vice principal Keri Lindaman.

Lindaman then called Dani to inform her that school resource officers from the El Paso County Sheriff's Office would be visiting her home to conduct a health and wellness check.

A short time later, deputies from the sheriff's office arrived to their home.

During their visit, Isaiah's father, Curtis Elliott, said that their son 'was in tears when the cops came'.

'He was scared. We all were scared. I literally was scared for his life,' Curtis told KDVR.

Police said in a report that they advised Isaiah that if his behavior continued, he could 'potentially face criminal charges for interference with staff, faculty, or students of educational institutions'.